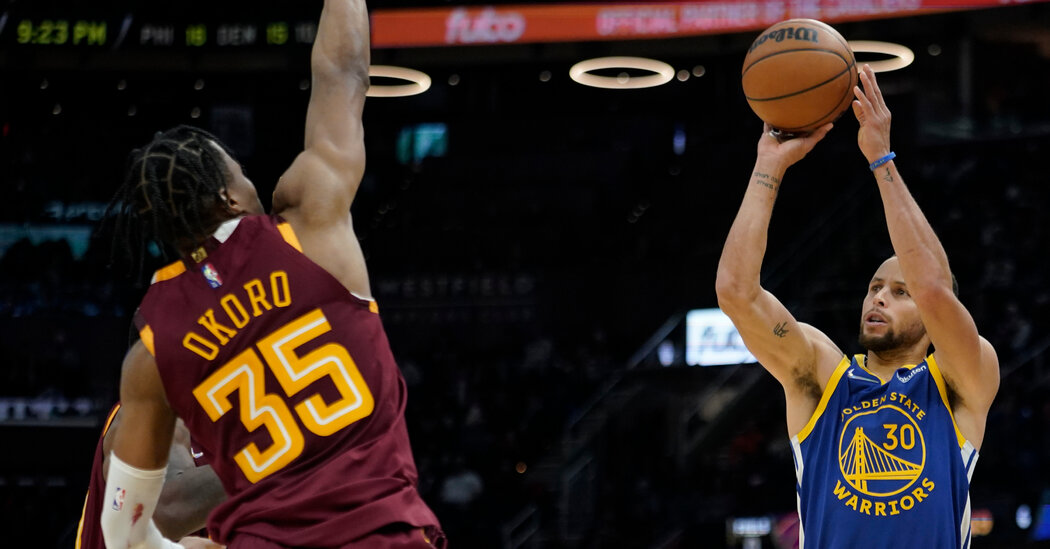 After many fans moved on from the Warriors era to ponder possible dynasties from LeBron James and the Lakers or Giannis Antetokounmpo and the Bucks, Golden State has come roaring back early this season behind the scoring of Curry.

On Thursday night, Curry had nine 3-pointers and 40 points as the Warriors improved to a league best 13-2 with a 104-89 win over the Cleveland Cavaliers. The Warriors entered the fourth quarter down 13. No problem for Curry, who had 20 points in the period, helping his team outscore Cleveland by 36-8 to win going away.

Starting in around 2015 or ’16, Curry, already a great 3-point shooter, seemed to almost break the game with a torrent of 3s, many from very, very deep, leading his team to five straight finals, including its most recent championship in 2018.

But Curry missed most of 2019-20 with a broken left hand. Although he bounced back last season, averaging 32 points a game, the team did not, missing the playoffs. Kevin Durant and Andre Iguodala had left in 2019, and injuries cost Klay Thompson more than two full seasons. The golden years at Golden State seemed to be over.

Yet at 33, Curry has helped turn the team all the way around this year.

The continued development of Jordan Poole (17 points a game, up 5 from last season); Draymond Green’s outstanding defense, rebounding (eight a game) and passing (eight assists per game); and another solid season from Andrew Wiggins (18 p.p.g.) are all a part of the resurgence. But Curry rightly deserves a huge amount of the credit.

In his first 15 games, Curry already has three 40-point efforts and a 50-pointer against Atlanta last week. Thursday night was his fourth game with nine 3-pointers. At 29.5 points a game he leads the race for what would be his third scoring title.

Curry is indisputably the best 3-point shooter in the game’s history. Though he has maxed out at nine this year, in his career he has 22 games with double-digit 3s made; the next best player is Thompson, with a mere five.

Curry has not shied away from the shot. Early in his career, about a third of his shots came from beyond the arc. That increased to 50 percent and eventually 60 percent in his prime years. This season, fully 65 percent of his shots are from 3, which would be a career high. His 85 3-pointers made leads the league by 20.

Oh, he also hits 96 percent of his free throws.

Curry is also choosy about his shot, to the team’s benefit. He is careful to avoid the shot most dreaded by statisticians, the long 2, which has a low percentage but without the bonus point the 3 offers.

The sheer number of his 3s seems to compensate for a slightly lower percentage from long range; he is hitting at 42 percent this season, which would be the second lowest mark of his career in a full season and down from the 45 percent or so he shot at his peak.

It’s also possible the figure is a little low because of the sample size. Should Curry sink a few more 3s, as it would seem he could, he could actually improve this season. And with Thompson finally practicing again after his injury nightmare, the team could soon be getting even better, too.