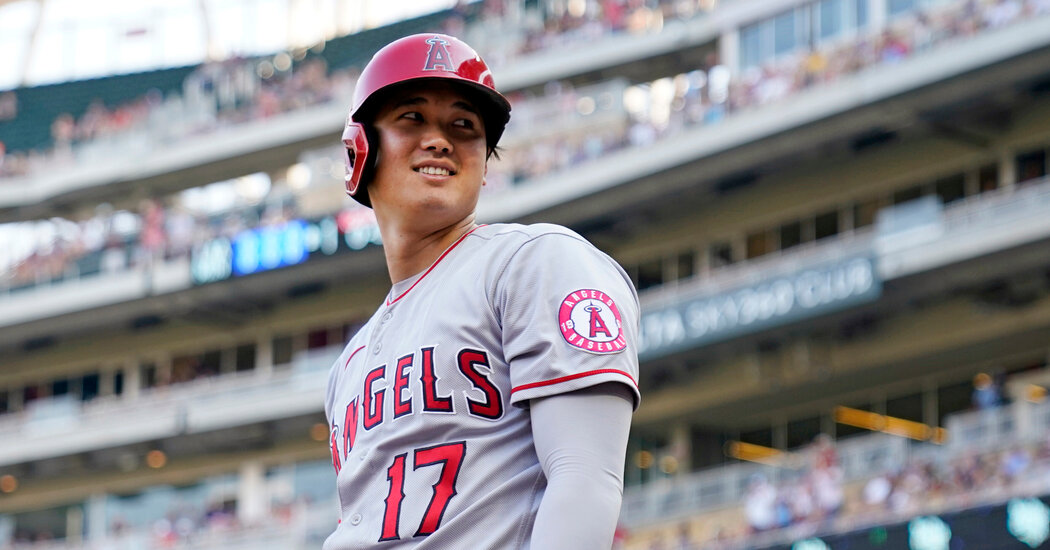 Shohei Ohtani was extraordinary this season. Ohtani, the Los Angeles Angels’ two-way star, smashed 46 home runs, drove in 100 runs and posted a .965 on-base plus slugging percentage, trailing only Toronto’s Vladimir Guerrero Jr. in the American League. As if that wasn’t impressive enough, Ohtani was also his team’s best starting pitcher, amassing a 3.18 earned run average and 156 strikeouts in 130 ⅓ innings over 23 starts.

On Thursday, Ohtani’s historic efforts were rewarded with the A.L. Most Valuable Player Award. He joined the former Seattle Mariners star outfielder Ichiro Suzuki, the 2001 A.L. M.V.P., as the only Japanese players in Major League Baseball history to earn the award.

Ohtani received all 30 of the first-place votes for the award, which is presented annually by the Baseball Writers’ Association of America. He beat out his fellow finalists, Guerrero, who received 29 second-place votes, and second baseman Marcus Semien, also of the Blue Jays, who received 24 third-place votes.

Few people beyond Ohtani’s inner circle may be happier about his achievement than Tomoyuki and Kaoru Iwase. They have never formally met Ohtani, 27, but they have watched him play perhaps more than anyone outside of his family.

This season alone, Kaoru attended 136 of the Angels’ 162 games to watch Ohtani play (not including the Home Run Derby in Denver in July). Her husband, Tomoyuki, said he attended roughly 10 fewer games. The superfans used to fly to Japan to see him play for his former team, the Hokkaido Nippon-Ham Fighters in Nippon Professional Baseball. Tomoyuki, 49, estimated they went to 15 different M.L.B. stadiums to see Ohtani play this season. Kaoru, 38, posts about the travels on her Instagram page.

They own roughly 300 Ohtani memorabilia items, from his Fighters and Angels jerseys to his bobbleheads to balls he tossed into the crowd. (No autographs, though.) A few years ago, they had a wedding photo shoot at Angel Stadium while donning — naturally — Ohtani jerseys. They used to live a 30-minute drive away from the stadium in Anaheim but last year moved to an apartment a five-minute walk from the ballpark.

“Even in the off-season, we take a walk to Angel Stadium,” Tomoyuki said in a video interview. He added laughing, “It’s our main home.”

So when Ohtani was announced as the A.L. M.V.P., the moment meant more — to the sport, to Japanese baseball fans and others — than simply the capstone of a magnificent campaign on the field.

Throughout his career, even back in Japan, Ohtani has continually faced skepticism over his ability to remain a two-way player. It is hard enough being an everyday hitter in M.L.B., the top league with the best players in the world, let alone also serving as a starting pitcher.

But all along, even after having Tommy John surgery on his throwing elbow, his right, in 2018 and another elbow injury in 2020 forced him to miss nearly two seasons of pitching, he insisted on doing both. In his first season in M.L.B., in 2018 after signing with the Angels, Ohtani won the A.L. Rookie of the Year Award. Freed from the playing-time restrictions imposed by his teams in the past, Ohtani was even better this year.

“Why I love Shohei and why he’s the best and why I’m chasing him, the reason is that his mind is the best,” Kaoru said, growing emotional. “He never changed his goal. In Japan, in high school, everybody said a two-player is impossible.”

In a television interview after being named the A.L. winner, Ohtani admitted he had dreamed about winning an M.V.P. award one day when he first came to the U.S. to pitch and hit.

“But I was more appreciative of the fact that American fans and the whole U.S.A. baseball was more accepting and welcoming of the whole two-way idea compared to when I first started in Japan,” he said through an interpreter. “It made the transition a lot easier for me.”

The Iwases, who met in Japan, have been following Ohtani’s career since he was a highly rated prospect in high school and in much-watched tournaments then. During his five seasons with the Ham Fighters, they traveled from the United States to Japan to see him play — and also visit their families while they were there. “Shohei was the first priority,” Kaoru said.

The Iwases have watched Ohtani grow up, get bigger and stronger, hit some speed bumps, and now dominate on the biggest stage.

Tomoyuki, now a U.S. citizen, moved to this country in 1997, when another Japanese pitching phenom, Hideo Nomo, was starring for the Los Angeles Dodgers. Tomoyuki’s favorite player used to be Suzuki — with whom he shares the same home region, the Aichi Prefecture. (Suzuki, who was also the A.L. Rookie of the Year in 2001, may become the first Asian player elected to the National Baseball Hall of Fame.)

“We are very proud of Shohei and Ichiro,” Tomoyuki said. “Ichiro, of course, he’s special. But Shohei, he changed the rules. What he does is just unbelievable.”

The Iwases, of course, weren’t the only ones to notice. Even though the Angels went 77-85 this season and extended their playoff drought to seven years, Tomoyuki said he noticed more Japanese people in the stands, too. During trips to Texas to see Ohtani play the Houston Astros and Texas Rangers, for example, he said they met Japanese fans who had come from Florida for the same reason.

Because of their jobs as wedding planners, the Iwases can watch their favorite player all the time. Tomoyuki is a wedding photographer and Kaoru is a hair and makeup artist.

They have their own companies, could work remotely this season and travel all over the country for weddings, lining up a few work trips with Angels road games. They find cheap ballpark tickets, and use cash or airline miles to pay their way. They try to arrive early to watch batting practice.

Asked if Ohtani recognized them after so many years, the Iwases chuckled and told a story. In 2018, they flew to Seattle for an Angels road trip and brought a happy birthday banner for Ohtani, who turned 24 on July 5, the final game of the three-game series.

Tomoyuki said Ohtani noticed the sign in the stands and perhaps recognized them but “we are afraid he’s thinking about us as stalkers.”

The Iwases laughed as they said this. To them, Ohtani is inspiring and so is his journey — much like theirs, coming to a foreign land for work. The new plaque on Thursday simply formalized what they already knew.

“He proves that the level of Japanese baseball is kind of high,” Tomoyuki said. “I’m very happy about that. And also, he proves himself as the No. 1 player, which was one of his goals.” Kaoru added seconds later, “I’m so proud of him.”