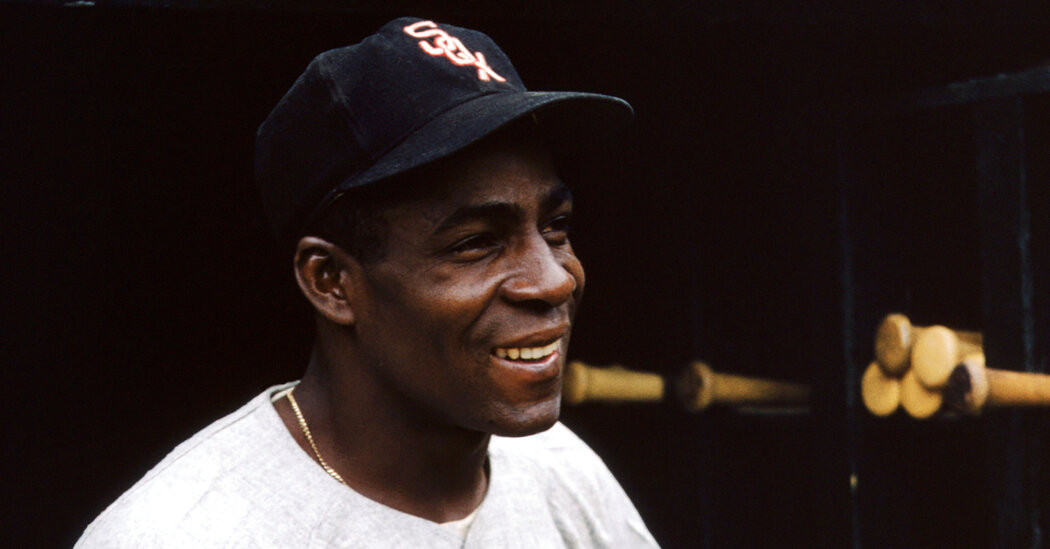 Minnie Miñoso was a mentor for generations of Chicago White Sox players. He served many years as a player and a coach, lived year-round in the city and upheld the team’s tradition as a welcoming place for Cuban stars. He liked to offer this advice:

“Be in love with the game,” Miñoso said by phone in 2014. “Do everything beautiful for the game and the people and the country you represent. That’s what I want everyone to do.”

When Miñoso died the next year, he was as young as 89 or as old as 92 — depending on your source — and his place in baseball history was just as confusing. Was he mostly a solid hitter with speed in the 1950s? Was he mainly a carnival act for Bill Veeck, the maverick White Sox owner, who briefly activated him in 1976 and 1980?

Or was Miñoso one of the best and most important players in baseball history?

“To me, Minnie is a legend,” the former pitcher Jose Contreras, who came to the majors from Cuba in 2003, said through an interpreter on Monday. “He was one of the reasons I started playing baseball when I was a kid. I wanted to be like him. He was one of our best representatives, our Jackie Robinson.”

The Hall of Fame is considering Miñoso again this off-season, reviving one of its most curious candidacies. In addition to the annual writers’ ballot — which will feature David Ortiz and Alex Rodriguez for the first time and Barry Bonds and Roger Clemens for the last — two committees will pore over 20 names from the past.

Miñoso is on the Golden Days ballot for candidates from the 1950s and 1960s. But his record crosses over to the other ballot — Early Baseball — which is largely evaluating Black players from the era before integration. Miñoso came to the United States in 1945, inspired by Robinson’s signing with the Brooklyn Dodgers, and spent three years in the Negro National League, helping the New York Cubans win a championship.

“I can’t even count the number of times that he and I sat in the conference room adjacent to my office, just talking baseball and talking about life and the joy that he had for this game and why he chose to pass up more lucrative opportunities to come play for the New York Cubans,” said Bob Kendrick, the president of the Negro Leagues Baseball Museum in Kansas City. “He wanted to chase the American dream, and he laid down that foundation to so many others, because they knew they would have the opportunity to play this game.”

Many light-skinned players from Cuba had appeared in the majors before Miñoso’s debut in 1949 for Veeck’s Cleveland Indians. Miñoso, however, was dark-skinned. He faced the same kind of racism directed at Robinson and other Black players, without the same command of English to help him get by.

Miñoso was hit by pitches 16 times in 1951, his first full season, and led the majors in that category nine times. He was comfortable crowding the plate, to be sure, but suspected there was more behind it.

“My first year in big league in 1951, one team — I no tell who — always call me names,” he once told The New York World-Telegram and Sun, which quoted him in broken English, as recounted in Jay Jaffe’s “The Cooperstown Casebook” in 2017. They used foul language and referenced his race, Miñoso said, adding: “I think they try make me afraid.”

Miñoso persevered. From 1951 through 1961, he ranked third in the majors in hits, trailing only Nellie Fox and Richie Ashburn. Miñoso had more steals and a better on-base plus slugging percentage than both.

Fox and Ashburn are Hall of Famers. So, of course, are Mickey Mantle, Willie Mays and Stan Musial, the only everyday players who matched Miñoso in batting average (.300), on-base percentage (.390) and slugging percentage (.450) in that 11-year prime.

Miñoso’s value is reflected in his wins above replacement, as calculated by Baseball Reference. Dozens of Hall of Famers — from Earl Averill and Hack Wilson in the 1930s to Jim Rice and Kirby Puckett in the 1980s — trail Miñoso’s total of 53.8 WAR.

“There are Hall of Famers that have less than that, if we’re looking at the new numbers,” said the former major leaguer Eduardo Perez, whose father, Tony Perez, is a Hall of Famer from Cuba who idolized Miñoso.

“If we’re looking at the analytics as far as on-base percentage and O.P.S., those numbers also belong. But most importantly, making the organization better is what it’s all about, and Minnie Miñoso belongs in the Hall of Fame because of all those little things that he did to make his teammates better.”

Miñoso’s trade to Chicago in 1951 sparked a White Sox revival that culminated in 1959 with the franchise’s first World Series appearance in 40 years. Miñoso made his mark on that team in absentia; he had been dealt back to Cleveland for Early Wynn, who won the majors’ Cy Young Award in that 1959 season.

Maybe if Miñoso had starred in the World Series, or won a batting title or a Most Valuable Player Award, he would have gained more attention from Hall of Fame voters. The writers virtually ignored him in 1969, and because of those cameos in 1976 and 1980 (which made him a five-decade player), Miñoso did not regain his Hall of Fame eligibility until the mid-1980s.

By then, many voters had never seen him play, or they knew him mainly for the comebacks. Miñoso lingered on the ballot through 1999, peaking at 21.1 percent in 1988, far below the 75 percent needed for election. Later committees have not been much kinder; in 2006, Miñoso was passed over in a broad vote on Negro Leaguers, because his time in Major League Baseball could not be considered.

This year may be different. In 2020, M.L.B. formally recognized several of the Negro leagues as on par with the American and National Leagues, a long-overdue decision that has expanded the official record books. Miñoso’s statistics were not exactly hidden before, but the new context can only help.

Miñoso hit .351 across the 1947 and 1948 seasons for the Cubans, and then Veeck bought his contract rights for $15,000. Cleveland was loaded with talent, so Miñoso spent most of 1949 and 1950 dominating the Pacific Coast League. By all rights, he should have been continuing his career as an elite major leaguer, which would have strengthened his Cooperstown case.

“It should have happened when he was still with us, and I know how much it meant to him,” Kendrick said of the possibility of Miñoso’s being elected to the Hall of Fame, adding later: “I just think we have a chance to get it right this time. We’re here as an institution to continually try to educate people about these legendary ballplayers who built the bridge. Minnie was one of those bridge builders, and those who become bridge builders in our society have a very special place. Minnie Miñoso did that.”