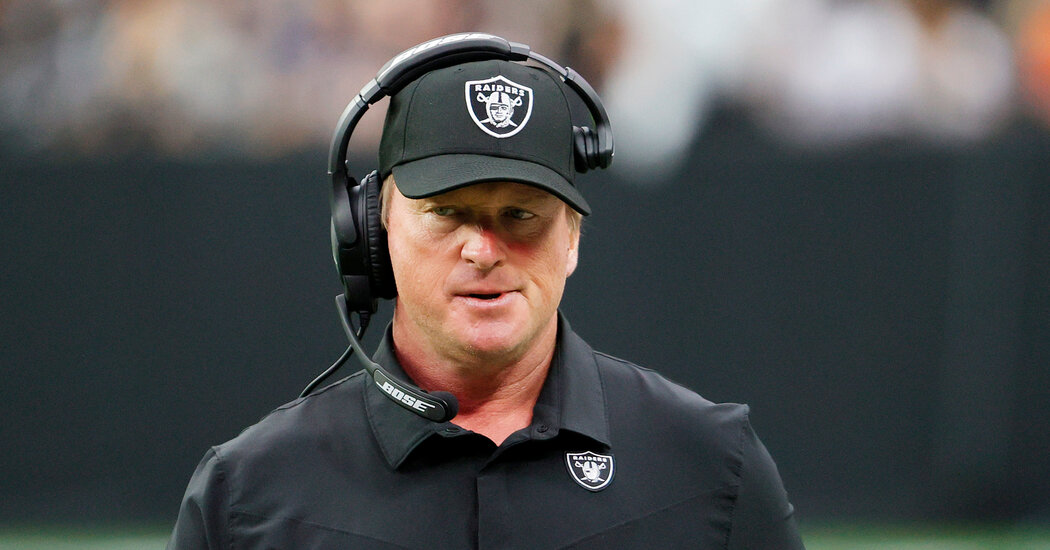 Jon Gruden, who resigned as coach of the Las Vegas Raiders last month after The New York Times published details of emails in which he had made homophobic, misogynistic and racist remarks, is suing the N.F.L. and its commissioner, Roger Goodell, for what Gruden’s lawyers contend was a plot to smear his reputation and ruin his career.

The 21-page lawsuit, filed Thursday in the Eighth Judicial District Court in Clark County, Nev., accuses the league and Goodell of engaging in “a malicious and orchestrated campaign” against Gruden, likening their treatment of the former coach to “a Soviet-style character assassination.”

The suit accuses the N.F.L. and Goodell of intentionally leaking the emails to The Times and The Wall Street Journal during the middle of the Raiders’ season to inflict “maximum damage” to Gruden. The Journal on Oct. 8 first reported that Gruden, who is white, had used racist tropes to denigrate DeMaurice Smith, who is Black and is the executive director of the N.F.L. Players Association.

When Gruden remained as coach after the Journal report, the league, according to the suit, “ratcheted up the pressure” by hinting that additional documents would be made public if the Raiders did not fire Gruden. The suit accuses the N.F.L. of then leaking more messages to The Times, which published its report on Oct. 11. Gruden resigned within hours.

Jordan Cohen, a spokesman for The Times, said, “As a matter of policy, The Times does not discuss its sourcing.” The Journal declined to comment.

The emails were discovered by the league during an investigation into workplace misconduct accusations against the Washington Football Team, which didn’t directly involve Gruden. The emails had been exchanged with the former Washington team president Bruce Allen, among others, during Gruden’s stretch as an ESPN commentator, and before he became the Raiders’ coach in 2018. In them, he regularly disparaged people across the N.F.L., including Goodell.

Raiders owner Mark Davis told reporters on Oct. 27, when the league’s owners met in New York, that team officials had learned about the emails only when The Journal contacted them. The league then sent a batch of emails to the Raiders. Davis said that he wondered why the league, which had the emails for months, did not share them sooner.

Those emails represented a fraction of roughly 650,000 messages reviewed by the N.F.L., which determined that the workplace environment in Washington was “highly unprofessional” and perpetuated bullying and intimidation. Washington was fined $10 million, but the league released only a short summary of the investigation — not a full accounting.

“There is no explanation or justification for why Gruden’s emails were the only ones made public out of the 650,000 emails collected in the N.F.L.’s investigation of the Washington Football Team or for why the emails were held for months before being released in the middle of the Raiders’ season,” Adam Hosmer-Henner, one of Gruden’s lawyers, said in a statement.

Brian McCarthy, a spokesman for the league, called the allegations “entirely meritless.”

“The N.F.L. will vigorously defend against these claims,” McCarthy said in an email to The Times.

In the aftermath of Gruden’s resignation, the Tampa Bay Buccaneers — whom he coached to the franchise’s first Super Bowl title, in the 2002 season — removed his name from their Ring of Honor at Raymond James Stadium. Gruden had insulted a member of the Glazer family, which owns the team, in a 2015 message. Gruden also lost his endorsement deal with the footwear and apparel company Skechers and was taken out of the Madden NFL 22 video game.

He also may have damaged his relationship with one of his former players on the Raiders, Carl Nassib, who in June became the first active N.F.L. player to publicly say that he is gay. Gruden used a derogatory term in writing that Goodell had pressured the Rams to draft Michael Sam, a gay player selected in 2014. Nassib requested a personal day and did not join the Raiders at practice when the team gathered for the first time after Gruden left.

Gruden apologized in a statement the night he resigned, saying that he “never meant to hurt anyone.”