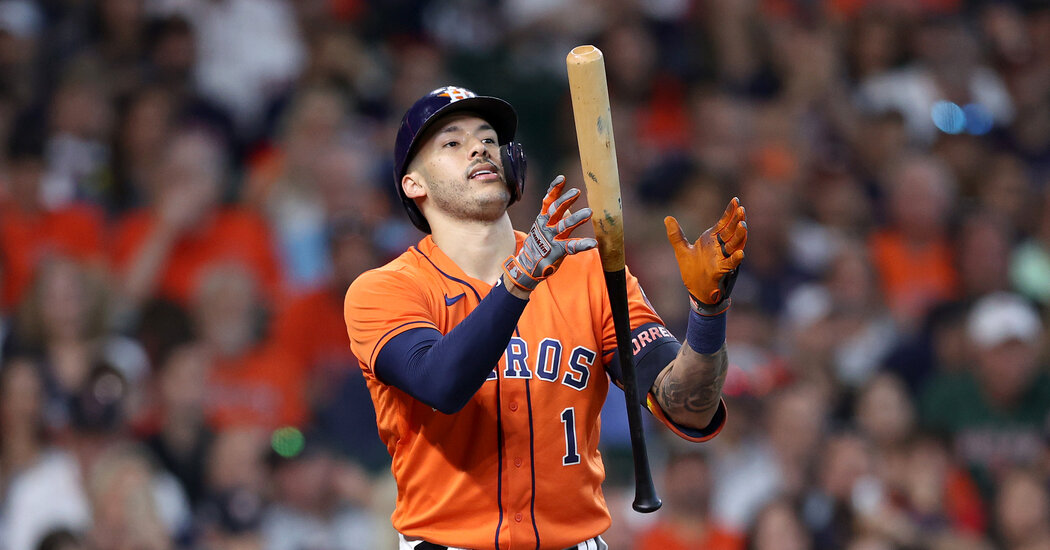 CARLSBAD, Calif. — Expected to still be rebuilding, this year’s Seattle Mariners offered a glimpse of their potential future. They won 90 games, the team’s highest total since 2003. Their hopes of reaching the postseason for the first time since 2001 — the longest playoff drought among teams from the four major North American men’s professional sports leagues — were alive until the final day of the regular season.

So the mission for Jerry Dipoto, Seattle’s president of baseball operations, this off-season is clear: continue shaping the young team into a contender — with loosened purse strings from Mariners owners. For an aggressive and restless executive like Dipoto, though, this winter is likely to offer a unique challenge.

At midnight on Dec. 1, the foundation of the sport — the collective bargaining agreement between the owners of the 30 Major League Baseball clubs and their players — expires. Both sides have publicly expressed some tepid optimism that a new deal will be reached by then. But given the many negotiating hurdles and fraught labor relations between M.L.B. and the players’ union, this hot stove season may be chillier and slower burning.

Baseball has not had a work stoppage since the strike that prematurely ended the 1994 season, canceled that year’s World Series and bled into the next season. But if no agreement is reached in a few weeks, M.L.B.’s owners could enact a lockout to freeze transactions. If that were to happen, team executives wouldn’t be allowed to talk to players, make major-league signings or swing trades.

“I can’t let those things affect me,” Dipoto said. “We are focused on how we make our team better and playing within the same parameters that we’ve always played in. All I can focus on is putting the team together. For us, that started a while ago. We’re engaged with free agents and we’re engaged in trade discussions. We’ll push and this is how we operate. We generally operate sooner rather than later. We tend to move pretty quickly and that part of our personality isn’t likely to change.”

Dipoto’s comments were mirrored by many of his counterparts at M.L.B.’s annual general managers meetings this week at a Southern California hotel. In many ways, it had the trappings of a normal start to the off-season despite the elephant in the room (or lobby). Team executives gathered at the lavish Omni La Costa Resort and Spa for meetings with each other, M.L.B. officials and agents. Discussions about trades and free-agent signings were held in the courtyards, hotel suites and at the bar.

Even Steven Matz — the free agent pitcher who had a resurgent season with the Toronto Blue Jays this year following an up-and-down tenure with the Mets — was spotted at the hotel.

“You’re talking to a man who has been up until 3 o’clock in the morning every night I’ve been here,” said agent Scott Boras when asked about the possibility of a slower, interrupted off-season ahead. He doesn’t represent Matz but he has other top free-agent clients like pitcher Max Scherzer and infielders Corey Seager and Marcus Semien.

Boras continued, “I would say that this marketplace is very aggressive because there are really good players out there.”

Not a lot, though, typically happens this early in the off-season. Atlanta won the World Series on Nov. 2. In the weeks that follow, free-agent players are often fielding initial overtures from teams, which are conversely figuring out how much players are seeking in their contracts and future homes. Trade talks are happening simultaneously.

“This is the feel-out period of time,” Derek Falvey, the chief baseball officer of the Minnesota Twins, said of this stage of the off-season. “For us, we’re talking with agents, we’re talking with other clubs, we’re talking about trades. We’ve had some conversations with players already and even made offers at different junctures. So for us, it doesn’t change.”

Added John Mozeliak, the St. Louis Cardinals’ president of baseball operations: “These meetings so far have gone like the last 20 I’ve attended.”

The biggest signing so far: The Los Angeles Dodgers inked the left-handed pitcher Andrew Heaney to a one-year, $8.5 million contract. But without much clarity on the future economic structure of the sport — the union has proposed, for example, ways for younger players to get paid more and sooner in their careers — mapping out budgets and building rosters might be more challenging. Pacts bigger and longer than Heaney’s might not be as common before a new labor deal is struck, which leaves players like Carlos Correa, the star shortstop of the Houston Astros, in limbo as he waits to sign what could be baseball’s next $300 million contract.

“It’s no different than ’15, ’16,” said Andrew Friedman, the Dodgers president of baseball operations, referring to the current collective bargaining agreement that was completed ahead of the previous pact’s Dec. 1, 2016 expiration.

“Yeah, there are things that could change. And there are decisions we made before and decisions we made after they reached an agreement. You, at least, directionally have a sense of different things. You may not have all the details. But for the most part, it shouldn’t materially change any one decision. It may change a collection of decisions.”

According to the payroll tracking site Cots Baseball Contracts, the Dodgers ($262 million) were believed to be the only team to exceed the current luxury tax threshold of $210 million in 2021. Five other teams — including the Yankees ($208 million), Houston Astros ($207 million) or San Diego Padres ($206 million) — were within $10 million of that line.

In its August proposal to players, M.L.B. offered a hard salary floor of $100 million — which would be a first for the sport and is something the union has long opposed — in addition to a lower luxury tax threshold of $180 million with steeper penalties. (Draft-pick penalties would begin at $210 million.) So how do team executives plan for what could be moving goal posts?

“I’ve had really no discussion with Hal on that because I don’t know what that is,” said Yankees General Manager Brian Cashman in reference to Hal Steinbrenner, the team’s managing general partner.

“Nor would he or anybody else because they’re openly negotiating on that aspect,” Cashman continued. “So at the end of it all, we’ll operate under the current system knowing we have some latitude. And hopefully, obviously, regardless of what happens, the intent is to find a better team to enter spring training with than the one we ended the season with.”

Cashman said he didn’t have a set budget from Steinbrenner but he had some direction on where payroll would go (up) given the Yankees’ needs (shortstop chief among them) and the money already committed to current players. As a result, the team will be connected to throughout the process to high-profile free agents like Correa and Seager.

Sandy Alderson, the Mets’ president, said his team’s working assumption was that there will be no work stoppage starting on Dec. 2. Spring training is to begin in February, with the 2022 regular season scheduled to start on March 31. “We’re obviously mindful that things may come to a halt in early December or some time thereafter, but right now we’re building for the season and for future,” he said.

Perhaps, though, this normally slow start to the off-season could be a prime opening for a team to pounce given the potential pause ahead. Alderson said the Mets would be “opportunistic” but “we’ll see how players feel about the next three or four weeks, and whether there’s a mutual interest in doing something before Dec. 2.”