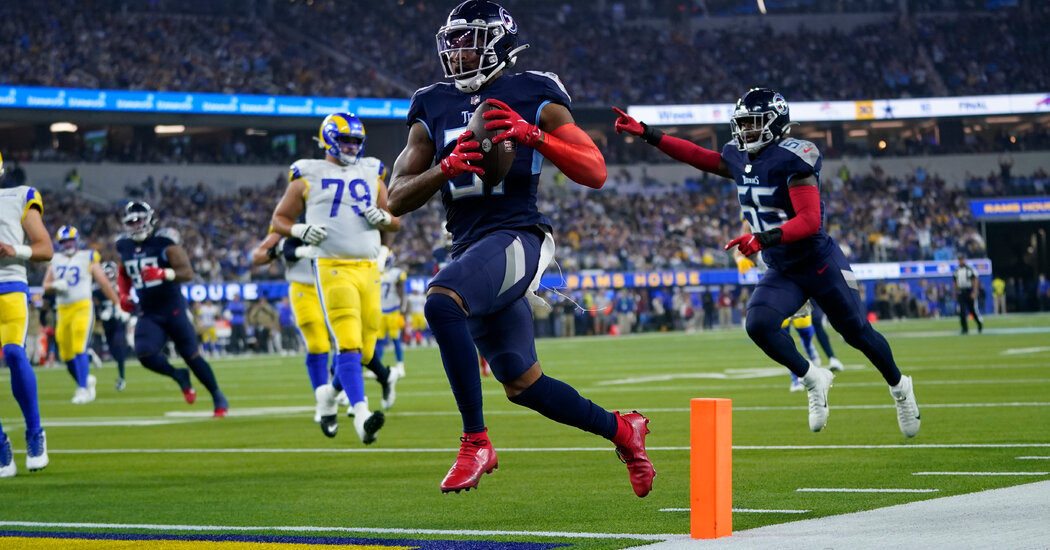 The Tennessee Titans played their first of what will be several games without Derrick Henry on Sunday night, and because they won that game against the Los Angeles Rams in an unequivocal romp, it would be irresponsible, really, to move into the next paragraph without again acknowledging that achievement: The Titans, playing without the rhinoceros of a running back so central to their identity, traveled across the country and swamped the Rams — as in, the had-lost-once-since-Labor-Day-Rams — by 28-16 at SoFi Stadium.

It resonated because the Titans’ defensive front, one of the more imposing in the N.F.L., ensured that they won a fifth consecutive game to remain atop the A.F.C., as the conference’s only seven-win team, at the midway point of this 18-week season.

With Jeffery Simmons throttling Rams quarterback Matthew Stafford up the middle and Denico Autry pestering him off the edge, the Titans ransacked his offensive line without needing to blitz. In holding the high-scoring Rams without a touchdown until the final 24 seconds, Tennessee sacked Stafford five times — Los Angeles had allowed eight across its first eight games — and otherwise bedeviled him to such an extent that in the second quarter he thought it wiser to fling a pass into traffic by the goal line than to be sacked for a potential safety.

As they did on a similar play a week ago, the Titans grabbed the errant pass and converted it into a touchdown, the first of two they scored within an 11-second span to turn a 3-0 deficit into a 14-3 advantage: On the Rams’ next offensive snap, Titans safety Kevin Byard swooped in front of Robert Woods and returned an interception 24 yards untouched.

“I hope it doesn’t run out,” Coach Mike Vrabel said of the Titans’ penchant for big defensive plays. “I know you can’t rely on it, but again, you put enough pressure and I’m feeling it over on the sidelines. I’m feeling that type of pressure.”

It was, in other words, the type of pressure sought by Rams General Manager Les Snead last Monday when he acquired from Denver the edge rusher Von Miller, who was inactive Sunday with an ankle injury. In a league that prizes draft choices, Snead deals them, preferring the relative certainty of established players to the potential, and unknown, of picks out of college. The insistence on winning now and worrying about the future later redoubles the importance of, you know, winning now, and though the Rams (7-2) remain a strong contender, they dropped a game behind the Arizona Cardinals — who won the teams’ first meeting — in the N.F.C. West.

As Snead was completing the trade for Miller, the Titans were learning the extent of Henry’s injury. Until breaking a bone in his right foot, Henry led the N.F.L. in rushing attempts, yardage and touchdowns, as he did in 2019 and 2020. When asked after Sunday’s game about Henry, Vrabel scrunched his face in a brief grimace, perhaps knowing that his response would breach one of coaching’s unwritten protocols: Don’t talk about unavailable players.

“We’ve moved on since Derrick,” Vrabel said, adding, “Coaches got players ready that weren’t here, and they played in the game and they made plays to help us win.”

Replacing one 2,000-yard rusher with another, the Titans signed Adrian Peterson, 36, who scored their final touchdown, with three minutes left. He combined with D’Onta Foreman and Jeremy McNichols, Tennessee’s normal third-down back, to rush for 74 yards on 22 carries.

Just as Henry’s outsize presence defined the Titans, his absence will, too. They gained a season-low 194 yards, and their longest series traveled 44 yards; of their other eight that didn’t start at the Rams’ 2-yard line or consist of a kneeldown, none went beyond 30. That probably isn’t a sustainable approach long-term, but the Titans are an odd team.

As Aaron Schatz of Football Outsiders noted, they have allowed more yards per play this season than they have gained, a trend that continued Sunday night (4.7 to 3.5). Tennessee also lost to the Jets, which should have immediately plunged the Titans to the bottom of the A.F.C., as if they had landed on a slide in Chutes and Ladders.

The Titans are also a good team, though one that wins close games and rattles star quarterbacks and makes clutch plays — like Amani Hooker’s tackle in space that, with the Rams trailing by 21-9 early in the fourth quarter, limited Darrell Henderson to a 2-yard catch on third and 3 at the Tennessee 43; the Titans proceeded to stymie Stafford on fourth down.

Their pathway to the No. 1 seed and attendant home-field advantage, ever more valuable in an expanded postseason configuration that awards only one first-round bye, should be manageable, or at least not unmanageable. Next up is a home matchup against the New Orleans Saints, who will start a backup at quarterback. After that: Houston, at New England and Jacksonville, heading into the final quarter of the season.

It’s possible that Henry heals in time to rejoin the Titans during the playoffs. By demonstrating they can win without him, they improved their chances of winning again — back at SoFi in February, perhaps, for the Super Bowl — with him.