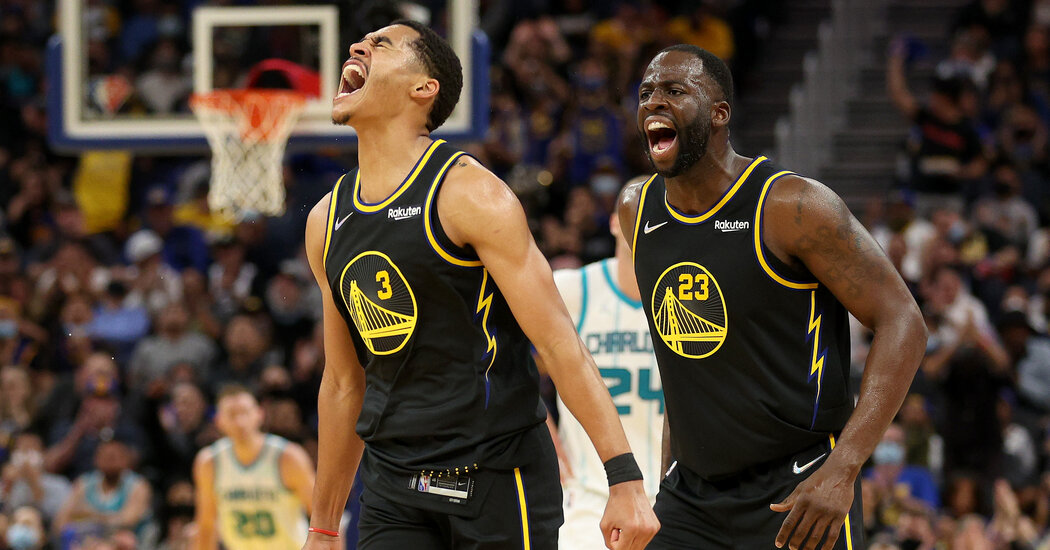 There he was on the court before a game in San Francisco, dressed in the uniform the rest of his team would wear to play that night against the Charlotte Hornets — striped socks and all. Golden State guard Klay Thompson traveled around the arc for several minutes practicing 3-pointers.

In the past few months, Thompson, sidelined for more than two years with two serious leg injuries, has been cleared to try the types of movements he’ll use in games. These are the movements that helped him score 37 points in a quarter or 60 points while dribbling just 11 times.

“Once he got to that stage it was like a cloud lifted,” Golden State Coach Steve Kerr said.

Not just for Thompson, for the whole team.

They ended Wednesday’s game tied with the Utah Jazz and the Miami Heat for the best record in the N.B.A., at 6-1. They did it by beating a thrilling young Hornets team, 114-92. While his teammates wait for Thompson, they’ve made sure they’ll be poised as a legitimate threat to win the Western Conference after he returns.

“We got a run going on so we’re just trying to stay with it,” said guard Jordan Poole, who scored 31 points and grabbed 4 steals on Wednesday.

Poole has been a big part of Golden State’s recent success as the team’s starting shooting guard in Thompson’s absence. He has leaned on Thompson and Stephen Curry for handling the ebbs and flows of being in that position. Wednesday’s game followed a relative shooting slump for Poole, who became no less aggressive through it. He shot 16 3-pointers against the Hornets, making seven.

Golden State drafted Poole late in the first round in 2019, just after the last of its five consecutive trips to the N.B.A. finals, which resulted in three championships — and just after Thompson tore the anterior cruciate ligament in his left knee. And so began an unusual rebuilding project.

Golden State fortified its roster with lottery picks while it waited through Thompson’s knee injury and a later injury to Curry. Then Thompson tore his right Achilles’ tendon in November 2020.

To top it off, Curry wasn’t feeling well on Wednesday, Kerr said.

For a while the Hornets took advantage of some sloppy play by Golden State. Kerr got caught pouting during the first quarter.

Forward Draymond Green noticed and told him to buck up. The team needed his energy.

“I was kind of embarrassed,” Kerr told reporters after the game, smiling at the thought. “After all the turnovers I was like, ‘Fine, fine, whatever.’ Acting like they were on their own out there. It was not my best moment as a coach.”

The team has shown repeatedly this season, though, that it has developed enough depth to overcome challenges, self-created or otherwise.

That strong defensive performance proved critical on Wednesday. The Hornets entered the game as the highest scoring team in the league, and Golden State held them under 100 points. A dazzling young team with two burgeoning stars in LaMelo Ball (14 points and 8 assists on Wednesday) and Miles Bridges (32 points and 9 rebounds) got a history lesson in the third quarter. That’s when Golden State likes to deliver its kick.

When Golden State was dominating the league a few years ago, it didn’t matter what its opponents did in the first half — a third-quarter domination by Golden State would bury them.

The script was a little bit different on Wednesday night.

Against the Hornets, Gary Payton II energized the team with a memorable dunk, plus steals, blocks and deflections.

“This is what I’m here for,” he said. “Just to come in and spark whatever we need to spark on the defensive end and get us going. You know our offense, we can do anything.”

The son of the Hall of Fame defender Gary Payton, he had earned Golden State’s 15th roster spot with his defense. The 28-year-old journeyman had three steals and a block to go with 14 points and played in a way that Kerr said earned him regular playing time.

“We’re starting to build an identity and it’s very much defensive minded,” Kerr said. “Which is kind of fun.”

After an active final stretch from Payton, Kerr wanted to let the crowd fete him. He removed him from the game with 2 minutes 23 seconds left so the fans could chant his name. As they did, Kerr noticed Green at the free-throw line applauding Payton as well.

Thompson, his lightly worn uniform traded in for black denim, wasn’t playing, but he wasn’t absent either. He sat on the bench and marveled at the team he saw before him — particularly Payton.

“I can watch Gary Payton II play defense all night long,” he wrote on Twitter, shortly after the game ended.

Said Payton, when asked about Thompson’s tweet: “I can watch Klay Thompson shoot the ball all day long. And I can’t wait to watch that all game long.”

Kerr said he has no intention of rushing Thompson, knowing the patience necessary when a player returns from an Achilles’ tendon injury.

“Generally speaking, the ones who have waited a full year plus have done much better,” Kerr said before Wednesday’s game. Thompson had surgery to repair his Achilles’ tendon on Nov. 25, 2020. After all these months, what’s another?