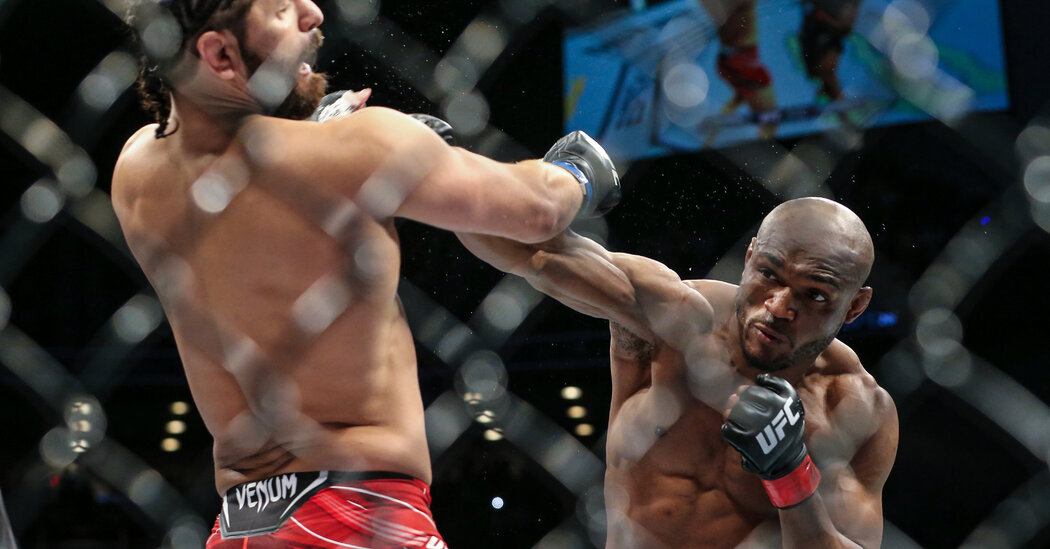 Kamaru Usman, one of the fiercest men on the planet, is content with the level of fame he has achieved in this bloody sport of mixed martial arts.

In his profession of violently battering other fighters, Usman said he does not want to reach an upper echelon of celebrity. If he does, it may inhibit him from riding down water slides and amusement attractions with his daughter.

For about one minute, Usman (19-1), the Ultimate Fighting Championship’s welterweight champion, thought out loud about whether he would enjoy elevated stardom. In mixed martial arts circles, he is revered as one of the best. Since becoming the 170-pound champion in 2019, he has defended the belt four times — three of those fights ending by knockout. But his résumé has not generated the mainstream stardom Conor McGregor and Ronda Rousey received. He is OK with that.

Last year, Usman said he took his 7-year-old daughter, Samirah, to a water park, and he appreciated that relatively few people interrupted him for selfies and autographs. Still, during other instances, Usman said fans in different cities in the last eight months approached him at restaurants, so much so that his daughter asked, “‘Daddy, why do people want to take pictures with you?’”

This middle tier of recognition, Usman said, is where he would like to stay.

“I wrestle with that every day,” Usman said in an interview. “I understand this level of fame and I understand that there are levels above this. I don’t think I want to reach certain levels.”

On Saturday, he may not have a choice. A stellar performance against rival Colby Covington (16-2) at U.F.C. 268 at Madison Square Garden will undeniably thrust him further into the spotlight, and perhaps set up Usman’s desired crossover event with boxer Saúl Álvarez, who also fights Saturday on a pay-per-view card in Las Vegas.

Usman and Covington headline a stacked card with another championship bout, the women’s strawweight champion Rose Namajunas facing Zhang Weili, and a lightweight No. 1 contender fight with Justin Gaethje and Michael Chandler. It’s the U.F.C.’s first event in New York since the Covid-19 pandemic began and is filled with fights that will impact multiple divisions.

Usman and Covington fought in December 2019, in Usman’s first title defense after stripping the belt from Tyron Woodley. It was a competitive back-and-forth battle rife with subjective controversies. The referee, Marc Goddard, temporarily stopped the fight twice — once in the second round and once in the third — for a shot near Usman’s groin and an eye poke that Covington claims Usman exaggerated. At the end of the third round, Usman landed a hard punch to Covington’s jaw. Covington fought through the injury for two more rounds.

Usman in the fifth round threw a straight right that sent Covington to the canvas. He got up quickly, but Usman followed with another powerful punch that again forced Covington to the ground. As Usman laid sprawled on Covington and delivered punches to his head, Goddard ended the fight, a stoppage Covington disagreed with because he said he was still defending himself.

“He knows who daddy is, he knows who really won that fight,” Covington said at a news conference, an event where he noticeably drew a large and loud fan base. “If he didn’t fake timeouts in the first fight, I would have destroyed him.”

The buildup to their last fight was hostile, and the feelings intensified since. After Covington finished Woodley via technical knockout in September 2020, the Usman and Covington participated in a heated television interview.

“I broke your face,” Usman said.

“Wait until I see you next time,” Covington screamed. “You’re dead.”

Covington latched himself onto the former President Donald J. Trump, and consistently wears “Make America Great Again” hats. Trump called him after his fight with Woodley to congratulate him, and the fighter insulted the Black Lives Matter movement at a news conference. Covington also took a picture with Trump in the Oval Office. Covington has said his theatrics and political leanings has made him a more interesting fighter than Usman. Usman disagrees.

“I know the persona and the facade that he puts out to the rest of the world and that’s not my lane,” Usman said.

“Even Trump doesn’t really rock with him like that,” he added. “He knows who the true winner is. I guarantee you Trump likes me more as a fighter than he likes that guy.”

Usman recently became the U.F.C.’s top-ranked pound-for-pound fighter, a distinction he earned after the Las Vegas police arrested Jon Jones in September after a domestic violence incident. Jones, the former light-heavyweight champion, had not fought in more than a year partly because of a disagreement with his contract as he transitioned to heavyweight.

It reinforced a problem the U.F.C. continually experiences with retaining dependable, marketable stars for mainstream audiences. McGregor, the flashy Irishman and the highest-grossing fighter in U.F.C. history, has lost three of his last four fights since 2018, and has faced legal troubles in the United States and Ireland, including a lawsuit in Ireland alleging he sexually assaulted a woman.

Rousey, considered a pioneer for women’s mixed martial arts, retired from the sport after only two losses, defeats that clearly drained her confidence. Usman said he respects the ability to be a U.F.C. champion and a face of the company, but would rather continue in his current promotional status.

“Every time you hear about Conor, it’s ‘Conor did this to this person, Conor did that, Conor is getting sued,’” Usman said. “It’s a double-edged sword. It gets to a certain point where it’s too much, and I don’t think I want to be in that place.”

Usman said he would next like to fight the boxer Saúl Álvarez, known as Canelo, if he defeats Covington because it would be a fan-favorite fight. None of the other welterweight contenders enticed him, he said, and a crossover event with Álvarez, the top pound-for-pound fighter in boxing, would align with the continued blurred lines of combat sports. Álvarez if fighting Caleb Plant in Las Vegas on Saturday night.

If that crossover bout does not happen, Usman would just like to go to more water parks.

“No one else really motivates me to get up at 6 a.m. and train — I’d rather just spend time with my daughter,” Usman said. “Have you ever seen the two best pound-for-pound fighters in their sports compete at their primes? That’s motivation right there.”