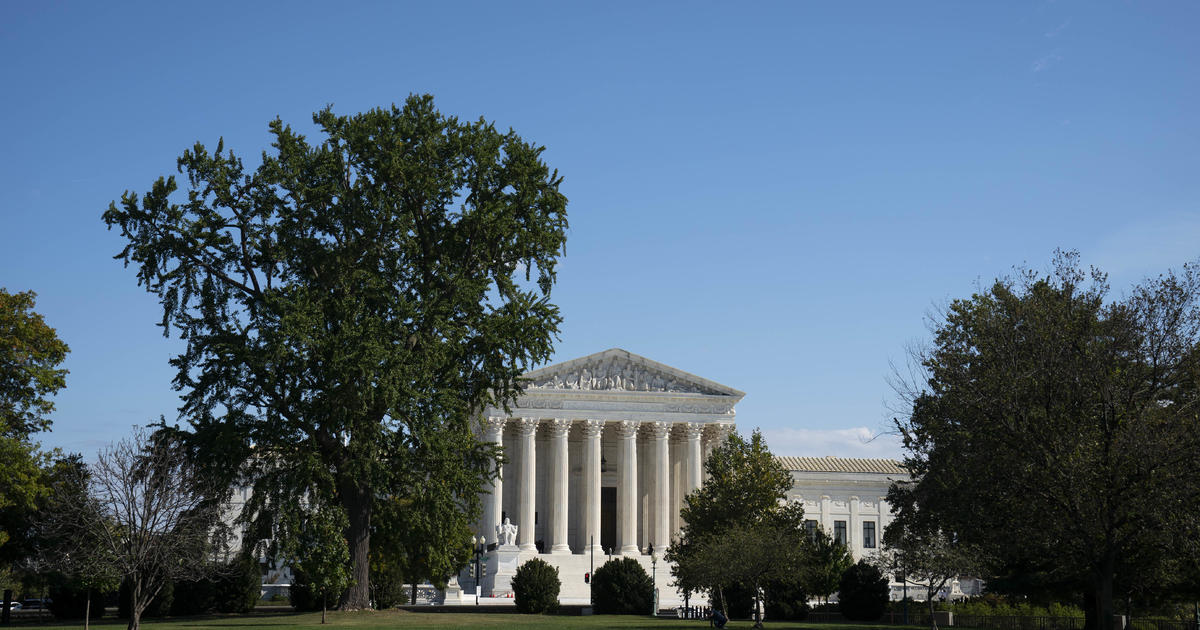 Washington — The Supreme Court heard oral arguments Monday in a pair of cases challenging a Texas law that bans most abortions after about six weeks of pregnancy, kicking off a consequential month for the high court that culminates with a case that abortion advocates warn is the biggest threat to reproductive rights in decades.

Arguments in the two Texas disputes — one brought by the Justice Department and a second from abortion providers in the state — spanned nearly three hours, during which several justices expressed concern that a range of constitutional rights could be under threat if the court accepts the Texas law’s novel enforcement mechanism. The law allows private citizens, rather than state officials, to enforce the law through suits filed in state court, and critics of the measure argue that structure has insulated it from federal court review.

“We would be inviting states, all 50 of them, with respect to their unpreferred constitutional rights, to try to nullify the law that this court has laid down as to the content of those rights,” Justice Elena Kagan told Texas Solicitor General Judd Stone during arguments in the dispute brought by the Justice Department. “That was something that until this law came around, no state dreamed of doing. Essentially we would be like, you’re open for business. There’s nothing the Supreme Court can do about it. Guns, same-sex marriage, religious rights. Whatever you don’t like, go ahead.”

In an earlier session on the lawsuit brought by abortion providers in Texas, Justice Brett Kavanaugh asked Stone whether Second Amendment rights, religious or free speech rights could be targeted by other states that enact legislation that models the Texas law.

“So we can assume that this will be across the board equally applicable to all constitutional rights?” Kavanaugh asked, raising the example of a law that authorizes suits against anyone who sells an AR-15 and subjects violators to $1 million in damages.

The high court heard arguments in the disputes just 10 days after agreeing to jump into the ongoing legal battle over the law, compressing a process that typically spans months into a matter of days. It’s unclear whether the justices will issue a decision with the same speed, and the law, the nation’s most restrictive, remains in effect while the proceedings play out.

The Texas measure at issue prohibits abortions after embryonic cardiac activity is detected, usually at about six weeks and often before a woman is aware she is pregnant. But the justices will not be deciding the law’s constitutionality, although the Justice Department and abortion providers argue the ban conflicts with its decisions in Roe v. Wade and Planned Parenthood v. Casey.

Instead, the questions in both disputes involve the measure’s enforcement mechanism and whether the Biden administration or abortion providers can bring suits over the Texas ban in federal court.

During the first round of arguments for the clinics’ challenge, Kavanaugh questioned whether the architects of the Texas law “exploited” a loophole in a 1908 Supreme Court decision involving suits in federal court against state officials charged with enforcing an unconstitutional law.

“So the question becomes, should we extend the principle” of that decision to “in essence, close that loophole?” he asked.

Kagan suggested the point of the Texas measure was to “find the chink in the armor” of the 1908 ruling, known as Ex parte Young, that “set out a basic principle of how our government is supposed to work and how people can seek review of unconstitutional state laws.”

“The fact that after all these many years, some geniuses came up with a way to evade the commands of that decision, as well as the command that the even broader principle that states are not to nullify federal constitutional rights and to say, ‘Oh, we’ve never seen this before, so we can’t do anything about it,’ I just don’t understand the argument,” she said, referencing the Texas officials who crafted the law.

Justice Amy Coney Barrett wondered whether, if a suit against a purported violator of the ban is filed in state court, “the constitutional defense can be fully aired?”

Both Barrett and Kavanaugh were among the five justices who declined a separate request by abortion providers to block the abortion law in September.

But a majority of the justices on Monday seemed inclined to allow the legal challenge brought by abortion providers to proceed. Still, some of the court’s conservative members raised concerns about possible overreach by the federal government.

Justice Neil Gorsuch asked Solicitor General Elizabeth Prelogar, who argued on behalf of the U.S., whether she was “aware of a precedent that permits an injunction against all persons in the country, the world, the cosmos who bring suit?”

Chief Justice John Roberts, too, told Prelogar the authority asserted by the Justice Department “is as broad as can be,” and suggested the Biden administration is seeking an injunction “against the world.”

“What is the limiting principle?” he said. “When we get another case down the road where it’s a different solicitor general whose making this argument in a different case, what are we going to be able to point to?”

Prelogar said the uniqueness of the law itself warrants the legal action from the Justice Department, telling Roberts “this seems like a novel case, and that’s because it’s a novel law.” The government, she continued, does not “lightly invoke an authority like this to sue a state.”

“The reason we’ve done it here is because S.B. 8 is so unprecedented, extraordinary and extraordinarily dangerous for our constitutional structure,” she said.

If a state can deputize the general public with enforcing a law, and allow at least $10,000 in damages to be awarded to those who bring successful suits, “then no constitutional right is safe. No constitutional decision from this court is safe,” she said. “That would be an intolerable state of affairs.”

While other states have enacted laws that ban abortions when embryonic activity is detected, those measures have been blocked by federal courts because they violate the Supreme Court’s abortion precedents, which prohibit states from banning abortions before fetal viability, which generally occurs at around 22 to 24 weeks of pregnancy.

But the Texas law has been allowed to stay in effect, including by the Supreme Court, despite questions of its constitutionality. Unlike laws in other states, enforcement of the Texas ban is delegated to private citizens, not state officials, who can sue in state courts anyone who performs an abortion in violation of the law or “aids or abets” them.

Justice Elena Kagan noted that since Texas’ law has remained enforceable, with nearly all abortions banned in the state, the nation has been able to see its chilling effect, and the law’s provisions have prevented “every woman in Texas from exercising a constitutional right as declared by this court.”

“Usually in these chilling effect cases we’re kind of guessing, ‘Well, this would sort of chill me,'” she said. “Here, we’re not guessing. We know exactly what has happened as a result of this law. It has chilled everybody on the ground.”

Abortion providers argue the law was purposefully designed to evade federal court review of a “blatantly unconstitutional statute,” creating a “heads-I-win-tails-you-lose regime whose evident purpose is to deter and obstruct access to federal and state court,” they told the high court in an earlier brief.

Both the abortion clinics and Justice Department have warned that if the Supreme Court allows the enforcement scheme to stand, it will pave the way for other states to pass laws targeting constitutional rights they disagree with. Already, a Republican state lawmaker in Florida has introduced legislation that mirrors the Texas ban, while GOP elected officials in several other states have said they are considering similar bills.

Arguments in the two cases involving the Texas ban took place exactly one month before the justices are scheduled to hear a potentially more consequential dispute over a Mississippi law banning abortions after 15 weeks of pregnancy.

In that legal battle, Mississippi officials are asking the high court to overturn Roe, which established a woman’s right to an abortion, and Casey, which said states cannot impose an undue burden on a woman seeking an abortion before viability. Abortion providers warned the court that allowing Mississippi’s law to stand would upend 50 years of precedent and pave the way for states to ban abortion entirely.

The issue of abortion is coming before a Supreme Court that has been dramatically changed since its last major abortion decision nearly 30 years ago. With three justices appointed by former President Donald Trump, the high court now has a 6-3 conservative majority, and 228 Republican lawmakers told the high court that the Mississippi case provides it with “a chance to release its vise grip on abortion politics.”