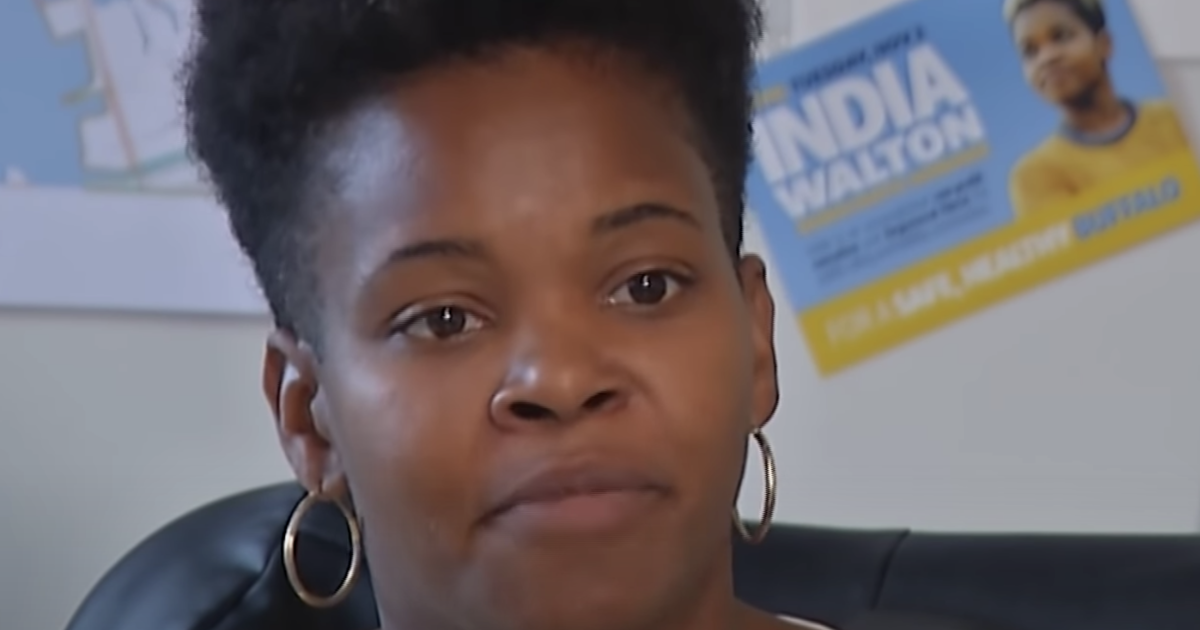 Buffalo is the second-biggest city in New York. It’s the third-poorest city in the nation. It could soon be the first major American city in six decades to elect a socialist as mayor.

And now, Buffalo is a flashpoint for the national divides in the Democratic Party.

“This race has taken on a life of its own,” India Walton, the Democratic nominee in Buffalo’s mayoral race, told CBS News. “I feel the weight of the nation watching what is happening in Buffalo right now.”

Walton shocked the city when she won the Democratic primary in June. She’s a 38-year-old nurse and community activist who has never worked in government. She’d be the city’s first female mayor.

Walton ran as a Democratic socialist against incumbent Mayor Byron Brown, a Democrat running for a fifth term. She won by 1,500 votes.

“This is organizing,” she told a cheering crowd on the night of her upset victory. “When we organize, we win.”

But Brown didn’t concede. Instead, he’s running against her as a write-in candidate.

He said just days after his primary defeat that his supporters didn’t want “a radical socialist occupying the mayor’s office in Buffalo City Hall.” And he set up a campaign office right across the street from hers.

Walton is endorsed by Vermont Senator Bernie Sanders — who started his political career as the socialist mayor of Burlington — and by Alexandria Ocasio-Cortez, who campaigned for her in Buffalo last weekend. Senate Majority Leader Chuck Schumer of New York also endorsed her.

Brown, who is Buffalo’s first Black mayor and calls himself “a progressive moderate,” is getting considerable support from Republicans, real estate developers and Buffalo’s police union in his write-in campaign.

In the race’s final days, both candidates are running on the same question: What would actually happen if a socialist becomes mayor?

Walton said that under her leadership, Buffalo has “to go back and address the root causes of concentrated poverty.” A top priority for her first year in office is building new housing for lower and middle class residents. She wants the city to have a universal basic income. And she said the wealthiest Buffalonians will pay higher taxes to fund city services.

Brown said Walton will either hurt the city’s economy, or just not get much done.

But he’s surprised Walton’s idea connected with so many voters in Buffalo.

“What I underestimated was there were people that organize around a socialist ideology, and they had organized in a section of the community that came out in pretty large numbers,” he said.

Others saw it coming.

“The conditions here put Buffalo in the forefront” for a socialist candidate, said Henry Louis Taylor, Jr., the University at Buffalo’s Director of Urban Studies.

“How do you deal with the reality that this a majority Black and people of color city, and most of them are poor?” he said.

Taylor pointed out that across the country, “socialism is no longer a dirty word with a lot of people.”

“People are looking and searching for answers, because they realize that a lot of things that they face today are not working.”

Buffalo is a Rust Belt city whose population and economy declined for decades. Downtown development has boomed under Brown, with the creation of new hotels, businesses and a built-up waterfront.

But poverty has barely budged under Brown’s four terms. Today, more than 28% of Buffalo’s resident live in poverty — an improvement of just 1 percentage point since Brown took office in 2006. And 43% of Buffalo’s children are living in poverty.

When asked if he takes responsibility for those numbers, Brown told CBS News that if it wasn’t for his efforts, “the poverty rate here could be a lot deeper.”

“Of course I’m concerned about where poverty is right now,” he said. “And within my powers, as mayor of the City of Buffalo, I have done everything that could possibly be done, and continue to do, to improve it.”

Walton says that poverty is personal, and that it shaped her campaign.

She had her first child when she was 14 and dropped out of high school, later earning her GED and a nursing degree from a community college.

Walton said that just a few years before her campaign, she had left an abusive marriage and struggled to support four children on a nurse’s salary. She teared up while recounting her story to CBS News.

“I’m walking my five-year-old in 20 degree weather five blocks home with four bags of groceries. Right?” she recalled. “And I’m a registered nurse.”

“I know the struggle and I don’t want people to have to be exceptional to live a decent life,” she added. “You should just not. And when you fall, when you make a mistake, there should be somebody there to pick you up. And I don’t see anything wrong with that.”

Voters will decide November 2 which Democrat will go to Buffalo City Hall. And what they decide will send a message to Democrats far beyond Buffalo.

“The problems that Buffalo face are the problems that America face,” Taylor told CBS News. “In Buffalo, what we’re seeing is a battle that is sure to take place over the years in a growing number of the cities around America.”

Early voting in Buffalo runs through Sunday, October 31. Election Day is November 2.  Absentee ballots must be postmarked by November 2.